Frontier is a quarterly art and comics monograph series, with each issue shining a spotlight on exciting and challenging new work by a single artist. The printing and look of each issue changes to match the style of work, and most issues feature an interview with the artist.

The Frontier masthead was created by the unparalleled Jillian Tamaki.

Frontier is focused on highlighting the work of up-and-coming talent in the North American indie comics scene, introducing the work of international artists we adore, and presenting uncommon dispatches from our favorite creators.

For the final issue of 2019, Frontier is beyond honored to bring Tunde Adebimpe back to his cartoonist roots with this moving book of all-new stories. Tunde weaves his own recent past (and familial mysteries) together with an intense and poetic meditation on mortality (and descendents). An electric mix of nostalgia, nihilism, and humor, the issue spans visual styles with confident ease.

Well known as the lead singer and founding member of the band TV on the Radio, Tunde Adebimpe is a polymath whose creative expression has found home in award-winning work as a musician, writer, animator, artist, director, and actor. 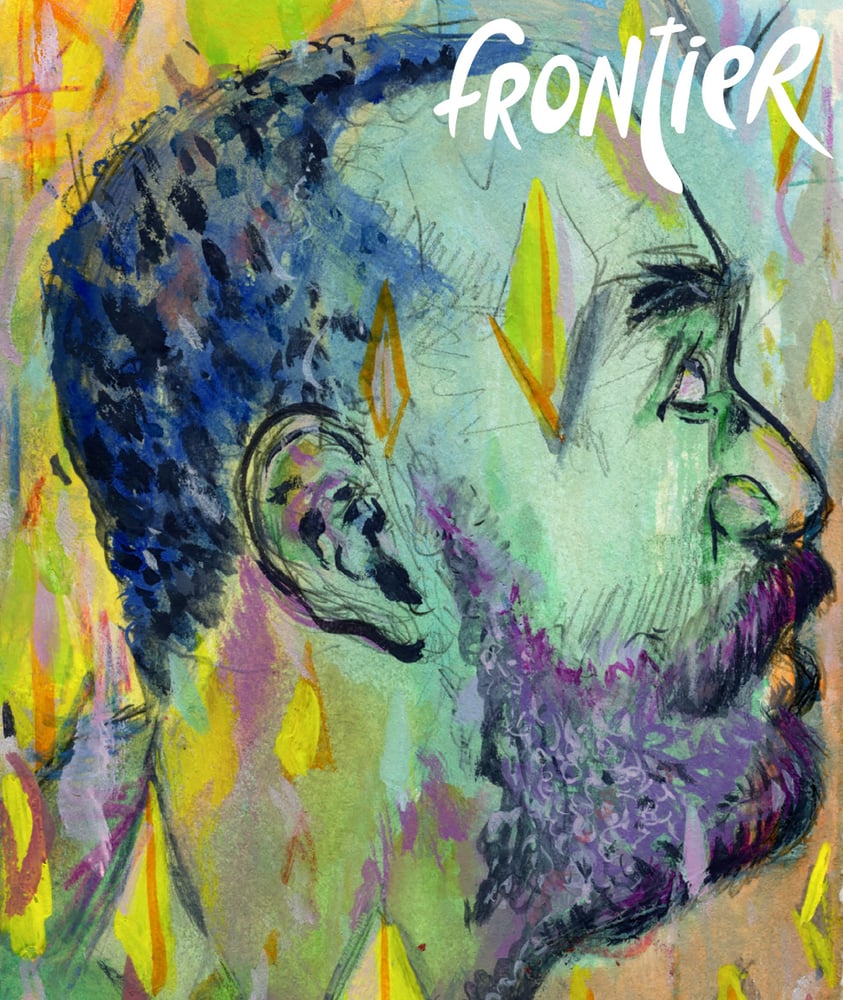 For this issue, Derek Yu brings readers into his vault of sketchbooks and hard drives spanning the last 10 years. We are honored to share an issue about the creative process itself, seen through early works, concept art, prototypes, and personal reflections from one of the most compelling and groundbreaking indie game developers in the world.

Derek Yu is a founding member of the Bay Area cartoonist crew The Bang Gang, and award-winning creator of the games Eternal Daughter, Aquaria, I'M OK, Spelunky. He is currently working on two(!) hotly-anticipated games, UFO 50 and Spelunky 2. 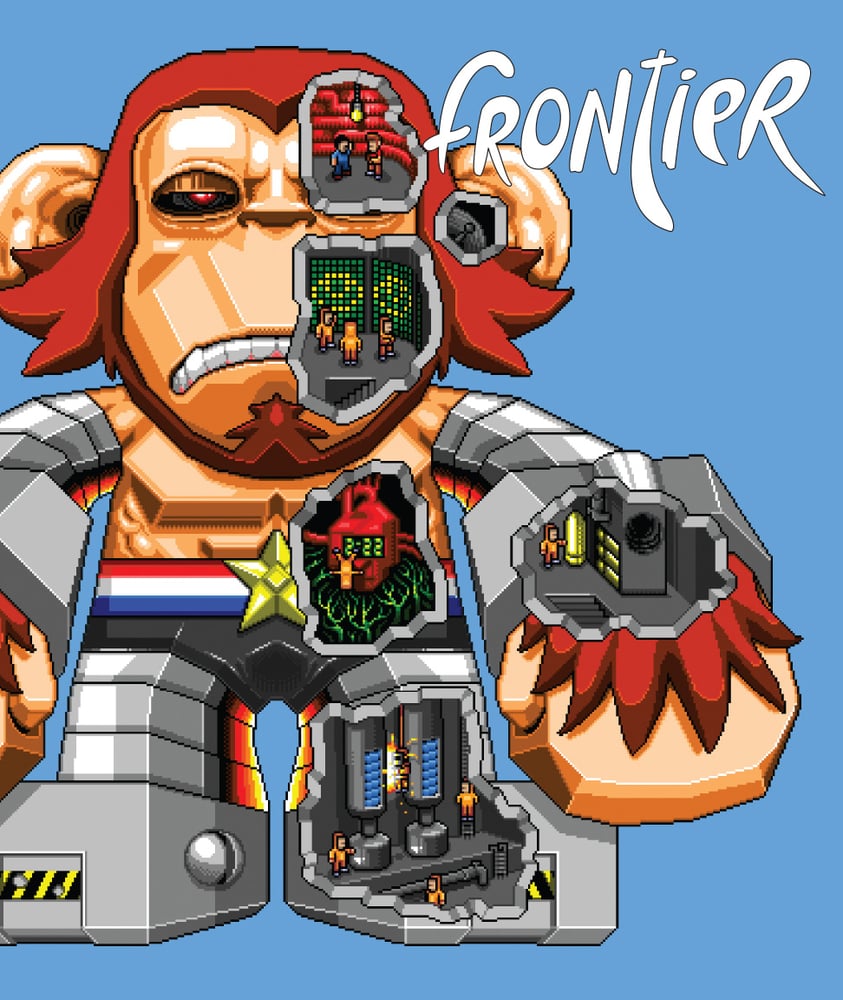 IN THE NAME OF LOVE is a new collection of love comics by Anatola Howard. Alien romance, karaoke flirtations, 4D love, and other brand new tales of romance populate this personal, funny, and dynamic issue.

Anatola Howard is a filmmaker, animator, and cartoonist living in Los Angeles. She is a recent graduate of CalArts and the author of the collection of comics, "What Are You Thinking About" from ShortBox. A true polymath, Anatola has created numerous animated films and video games already in her short but impressive career. 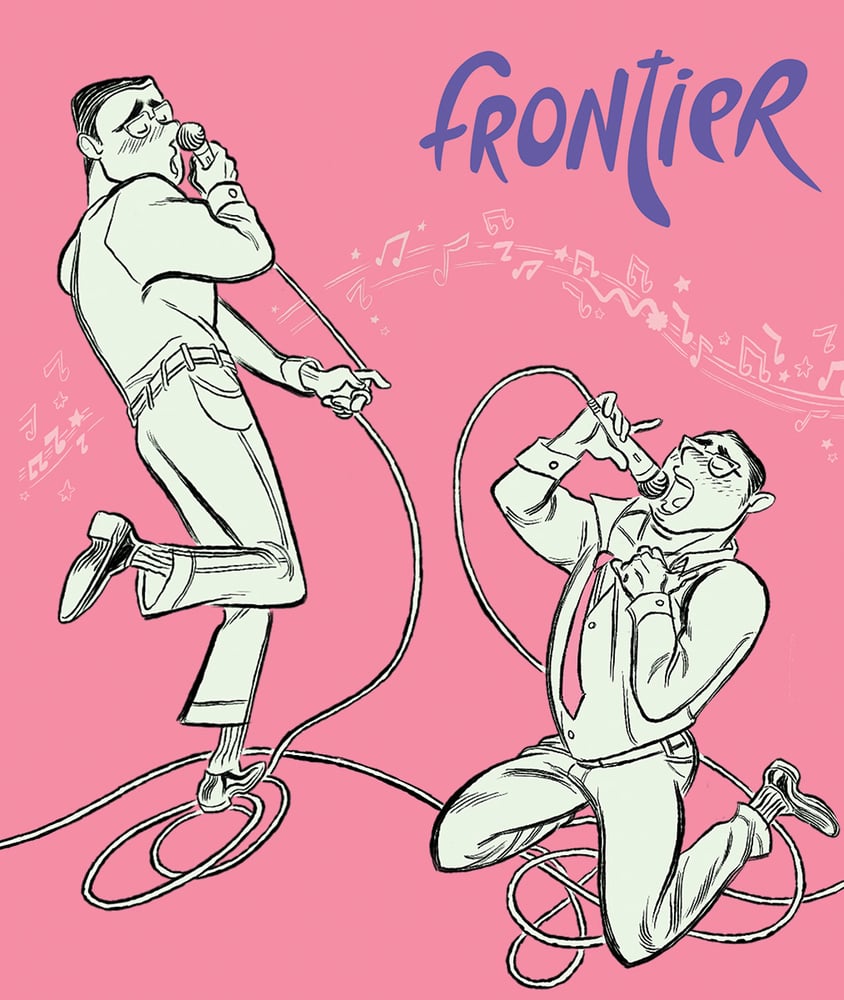 For the first issue of our 2019 series, Hannah Waldron shares her new weavings recounting imagery and moments from her travels in Baja California. Pushing the boundaries of format and storytelling, this beautiful collection is a stunning addition to the award-winning Frontier series.

Hannah Waldron is an artist and designer based in the UK. Her graphic and narrative-led image-making has been applied across a range of media from print to textiles, at both a personal and architectural scale. 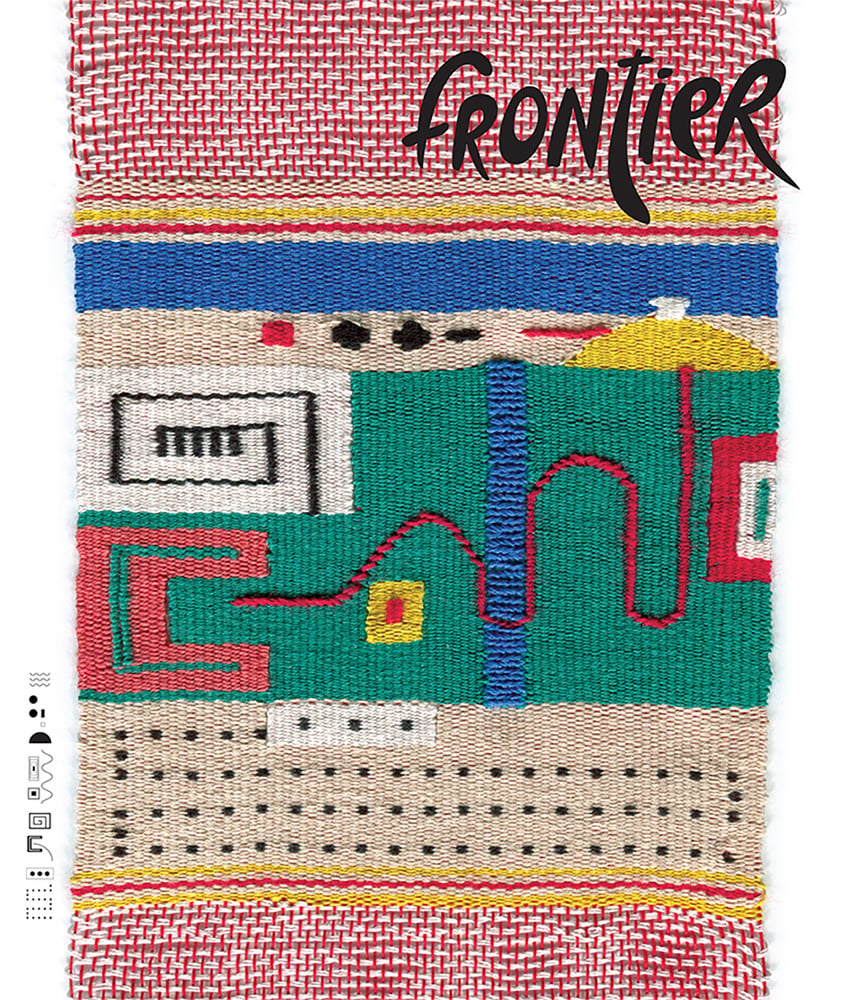 For the final 2018 issue of Frontier, Animator Tiffany Ford shares with readers a refreshingly immediate and raw side of her work. Tiffany presents sketches, studies, and daily comics pulled from her own diary, kept in a sketchbook on her honeymoon traveling in Japan with her husband Myles.

Tiffany Ford is a cartoonist and animator in Los Angeles. She currently works on the show Craig of the Creek and has worked previously as a color stylist on Steven Universe, and as a storyboard artist for Clarence. Tiffany’s personal comics are a hilarious glimpse into the fun & frustration of contemporary daily life. 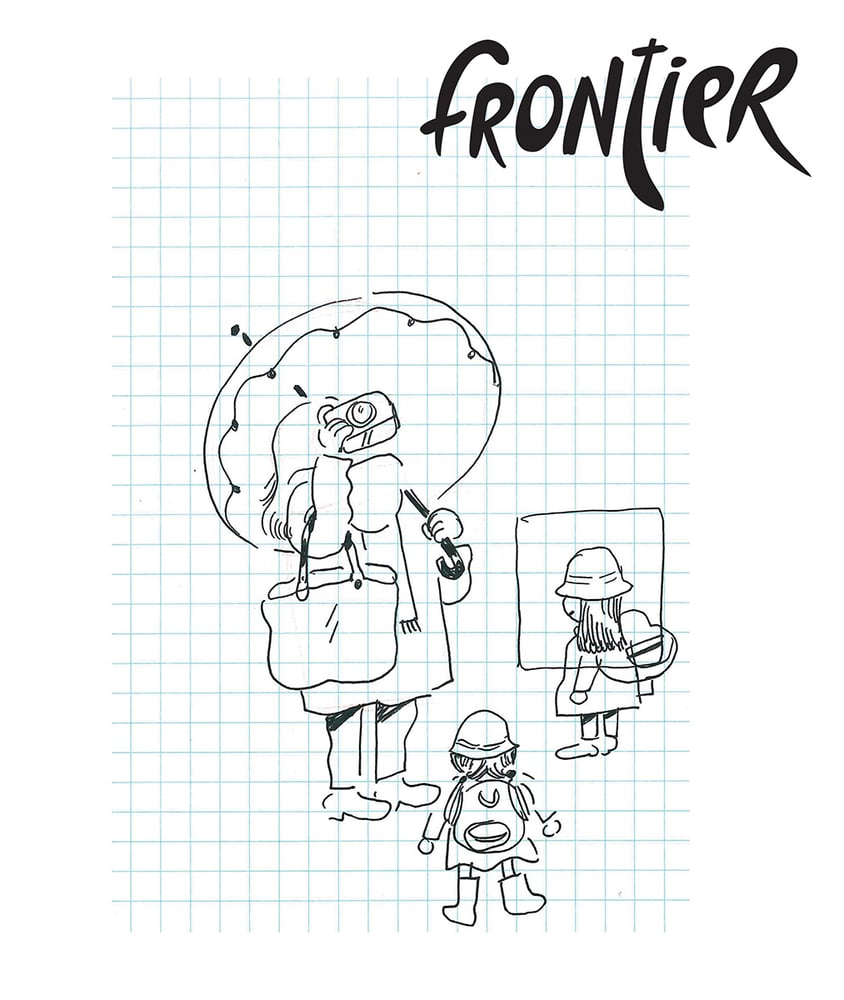 In “Mother's Walk,” Lauren R. Weinstein revisits the week of her second daughter's birth. In the retelling of the story and its surrounding paths, Lauren opens a window into a deeply personal, beautiful part of our human experience. The comic moved me (as a parent myself) in a way few other stories have. This is a story about navigating motherhood as a working artist, about best-laid plans, and about lingering in these transformative moments.

In the words of Gabrielle Bell from the book's epigraph, "Behind every beautiful thing, there is something sordid.”

Lauren Weinstein is an award-winning cartoonist, whose acclaimed comic strip, Normel Person, ran weekly in the Village Voice and now Popula.com. Sometimes her work can be spotted in the New Yorker and The Guardian and The Paris Review. She has published three books: Girl Stories, Inside Vineyland and Goddess of War. Currently she is working on a teenage memoir tentatively entitled, Calamity, to be published by Henry Holt, and a collection of her comics about motherhood. 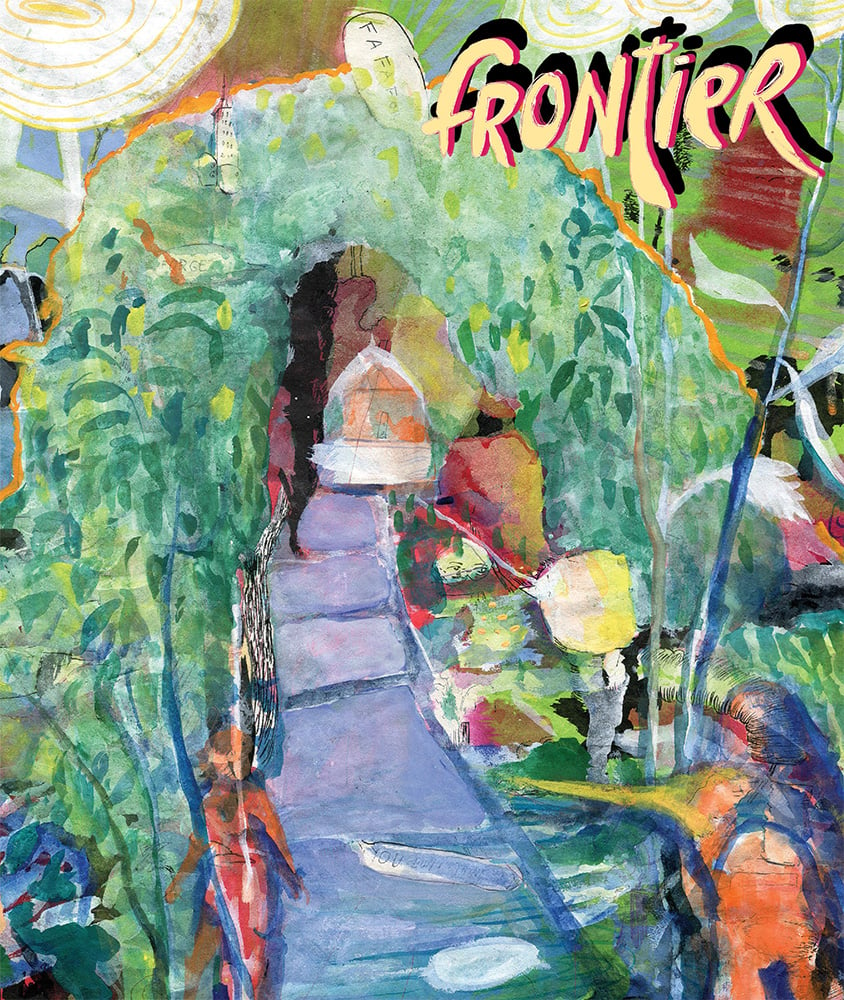 Ako Castuera’s ceramic sculptures combine animal, human, landscape and architectural elements, describing an interwoven profusion of life that calls into question our hierarchically ordered beliefs around human / non-human, animate / inanimate. Her hybrid forms suggest a world of upended borders in which connections to people, place, self and other are vividly expressed in a variety of traditional techniques that often give way to unorthodox applications.

Ako Castuera is a native Angelino whose roots carry rich material and intangible cultural heritage from Okinawa and Mexico into today’s American mainstream culture. Her sculptures and paintings have been exhibited in galleries and museums throughout the United States, and her work can also be seen in the popular animated television show, “Adventure Time,” for which she was a storyboard artist and writer for several seasons. 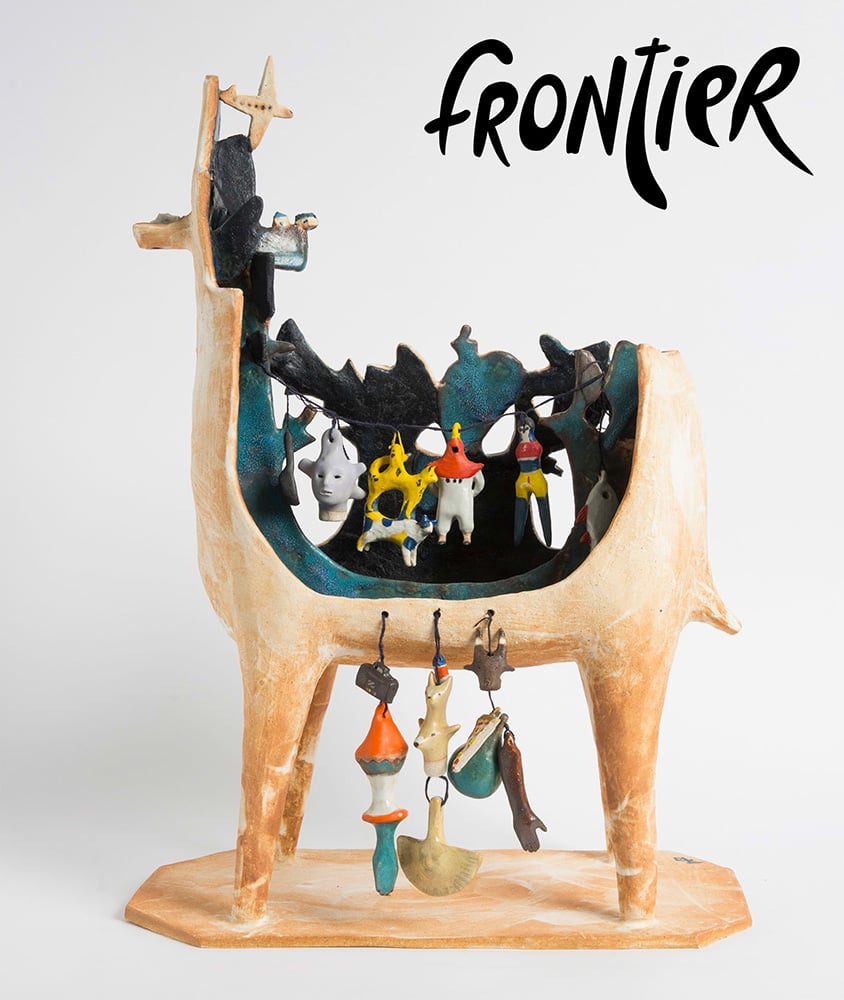 For our first issue of Frontier 2018, Tatsuro Kiuchi has created a series of new work inspired by his frequent motorcycle trips around the countryside outside of Tokyo. These new pieces are paired with lush, colorful paintings of travel and transit.

Tatsuro Kiuchi is an illustrator living and working in Tokyo. He has created work for such varied clients such as Royal Mail, Starbucks, and numerous publications. Tatsuro is the author of the picture book “The Lotus Seed” and the comic “The Earthling.” He is the owner of studio PEN STILL WRITES and teaches illustration at AOYAMAJUKU. 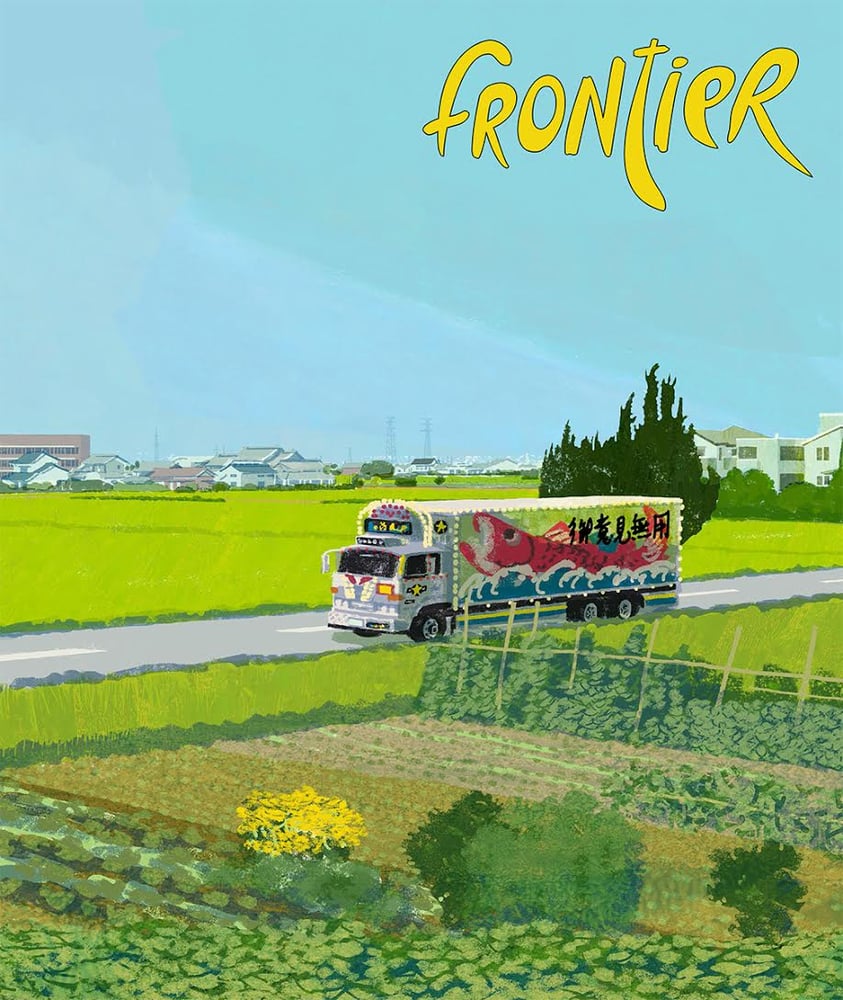 For the final issue of 2016, Rebecca Sugar shared personal sketches, early comic work, and poetry (along with commentary on the transition of her work over time). This small book offers a glimpse into the working process of an exceptional contemporary storyteller.

Rebecca Sugar is a talented cartoonist, writer, and ukuleleist currently living in Los Angeles. She is the author of the comic serial "Pug Davis" as well as a number of short comics. In her free time, she also is an Emmy-nominated Storyboard Artist, and creator of the television show, Steven Universe. 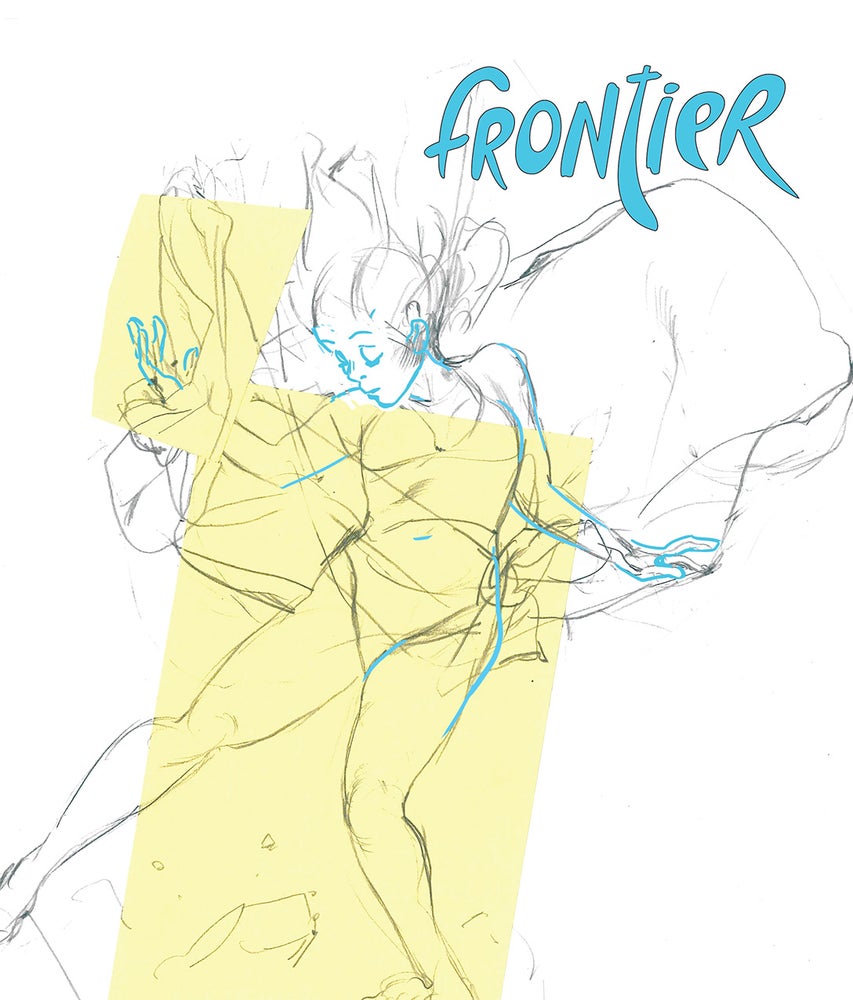 Frontier #13: Richie Pope features a brand new comic titled, "Fatherson" - a touching and surreal narrative of fatherhood. The issue is 32 pages, color, and features an interview with the artist.

Richie Pope recently moved from Richmond, VA to Dallas, TX. His work has been published in publications such as The New Yorker, The New York Times, The Atlantic, Scientific American, Nautlius and Tor Books/Tor.com among others. 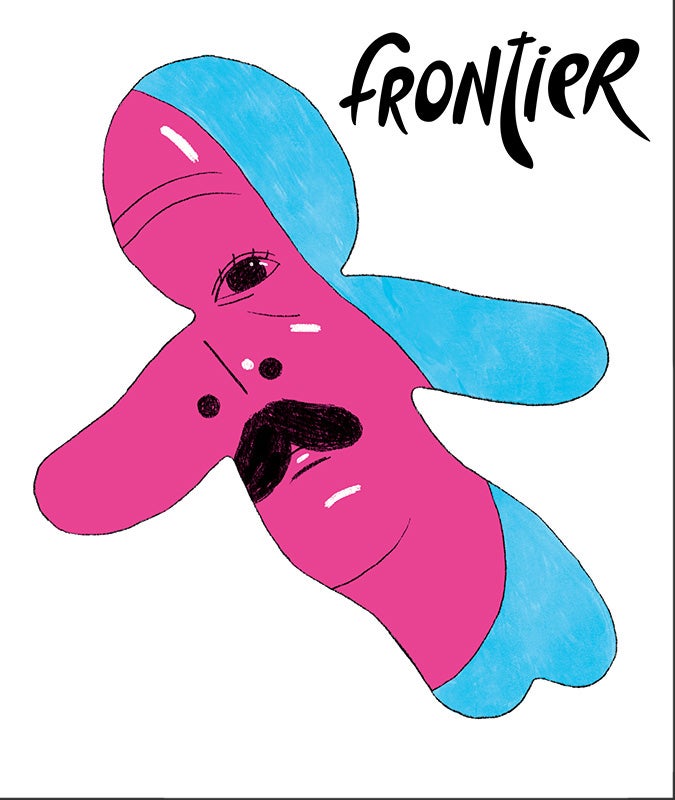 Debuted in May 2016 at Toronto Comic Arts Fest

Kelly K is an illustrator and cartoonist who spends half her time in Toronto and the other half on the net. She roots 4the universe and is rooting 4u too. 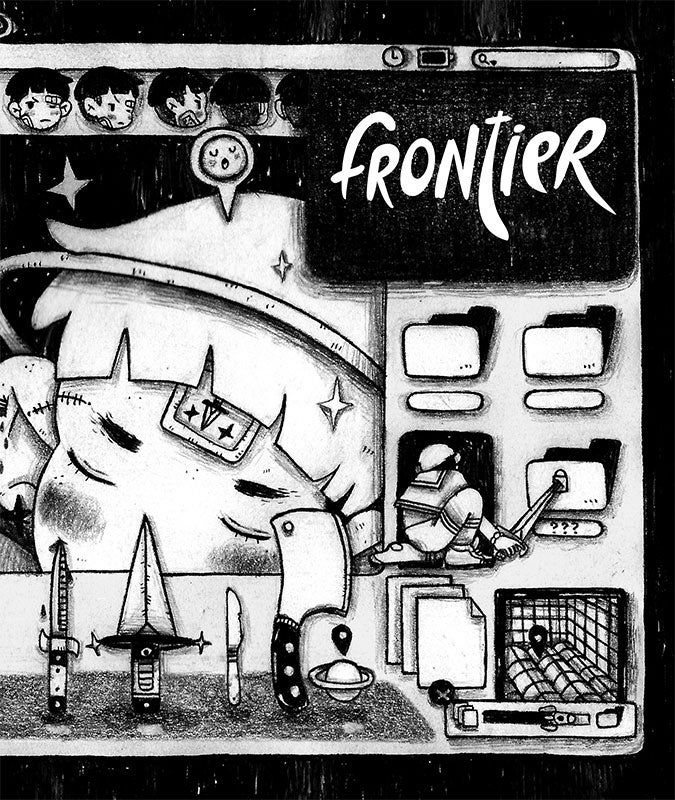 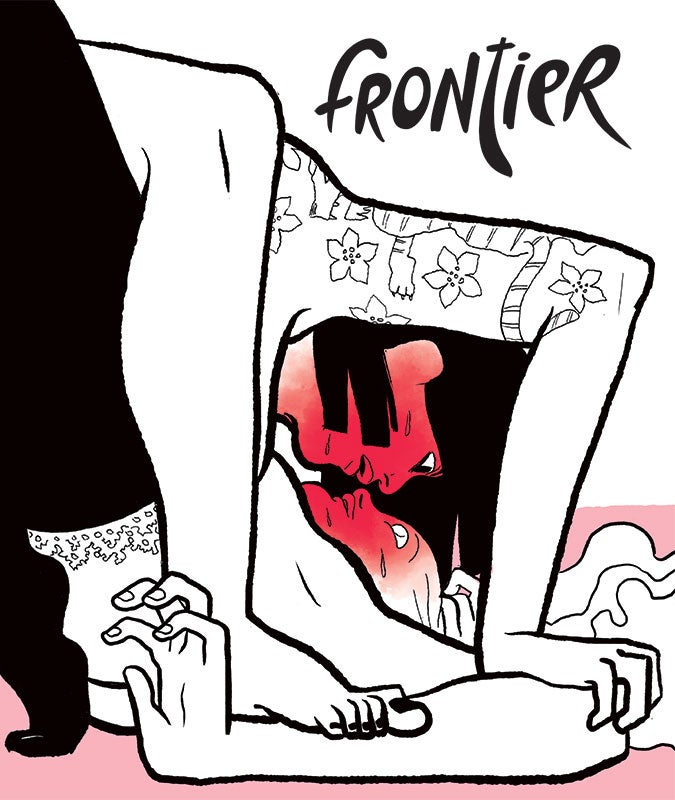 Told through prose and colorful geometric imagery, "Sensitive Property" is an affecting personal narrative of a real estate consultant, whose experience as a former radical has made them a valuable commodity.

Michael DeForge lives and draws comic books in Toronto. He works as an illustrator and as a designer for Adventure Time, and is lead singer of the band Creep Highway. Michael is an astounding writer, and arguably the most compelling and vital voice in contemporary comics. 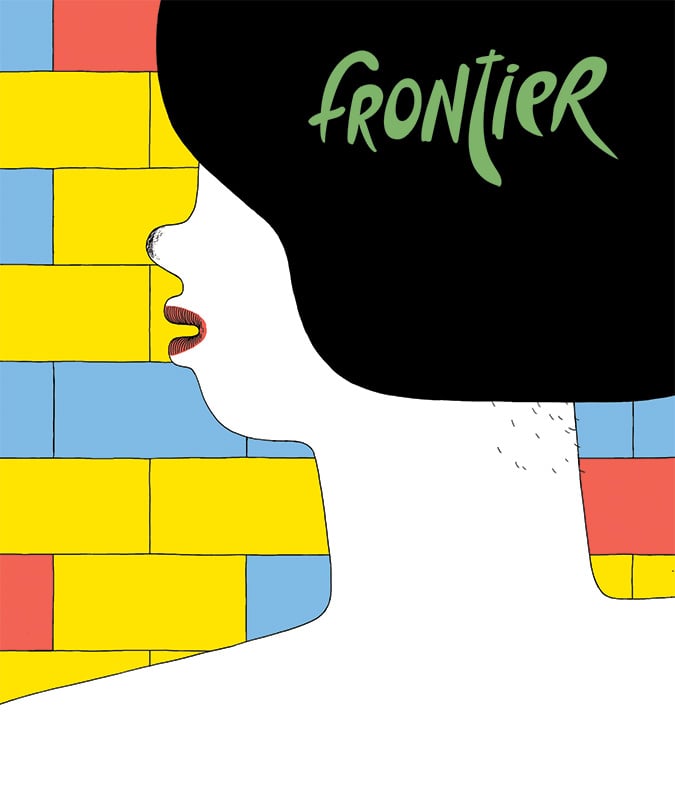 This issue features the beautiful watercolor comics of Becca Tobin! Follow lead singer Butter Road as she deals with the successes and turmoil of life in a band -- and the sentient musical instrument she baked in her kitchen!?

Becca Tobin is a cartoonist and artist who creates colorful and kinetic characters and moments in her drawn and painted narratives works. Her comics deal with sharing space and city life, nature, wizards, and living online. Becca recently returned to the UK from life on the road, and is the author of a number of delightful comics including, "10% Battery", "Eye Contact," and "Night Florist" from Dogooder Comics. 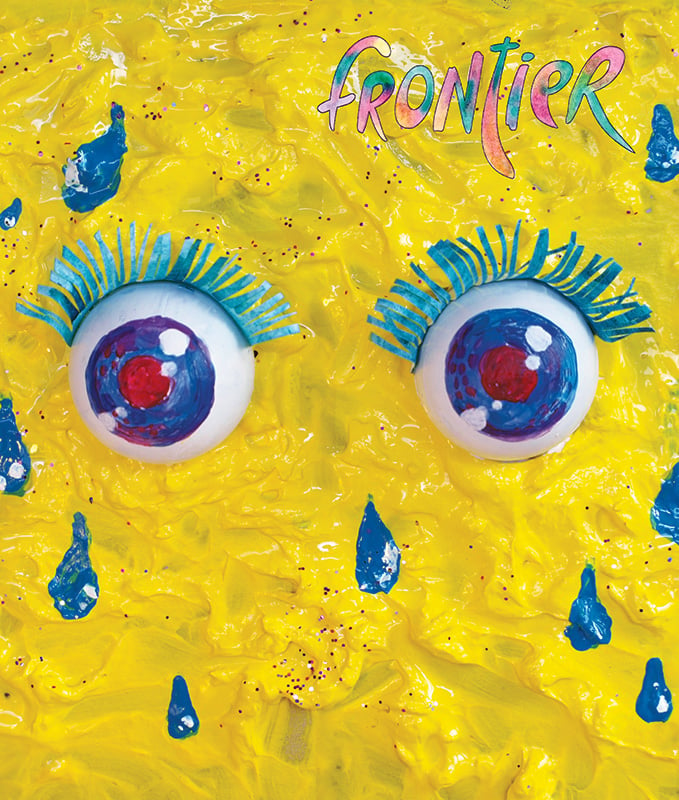 Our newest issue is the first English-language publication of work by Italian artist Anna Deflorian. Frontier #8 features the new comic "Faith in Strangers" - a visually experimental tale revolving around the mundane and sordid lives of young women at the gym and in fashion.

Anna Deflorian is a talented painter, illustrator, and cartoonist whose colorful and vibrants stories span a variety of media. Anna lives and works in Italy, and is the author of the graphic novel "Roghi" from Canicola edizioni. Her work has been featured previously in Kuti 21, Sans Soleil 3, and Kuš! 9: Female Secrets. 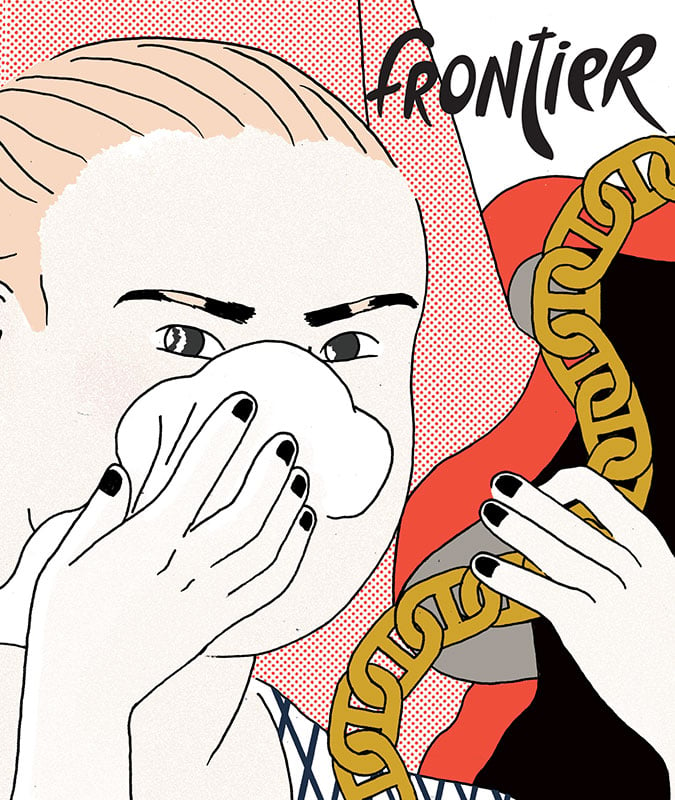 The first issue of 2015 the story "SexCoven" which revolves around IRL and online relationships, the seductive and secret world of early internet file-sharing, and life inside a commune (cult?). Mature Readers Only 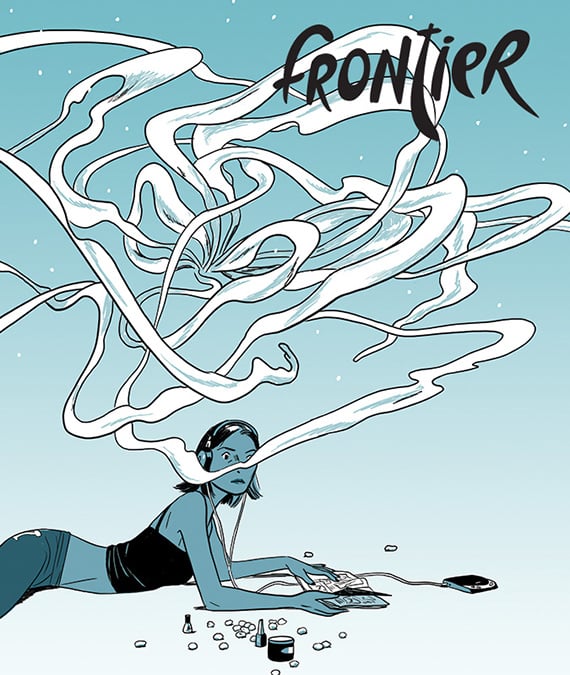 The sixth issue features an eerie and stunning original comic by Emily Carroll titled, "Ann by the Bed." Experience the dreadful tale of Ann Herron's bloody murder, and the awful legacy that persists today in Southern Ontario.

Emily Carroll is an illustrator and cartoonist, and the author of the fantastic anthology, "Through the Woods," - the wicked "Scary Stories To Tell In The Dark" for our generation of readers. She currently lives with her wife Kate and their large orange cat in Stratford, Ontario. 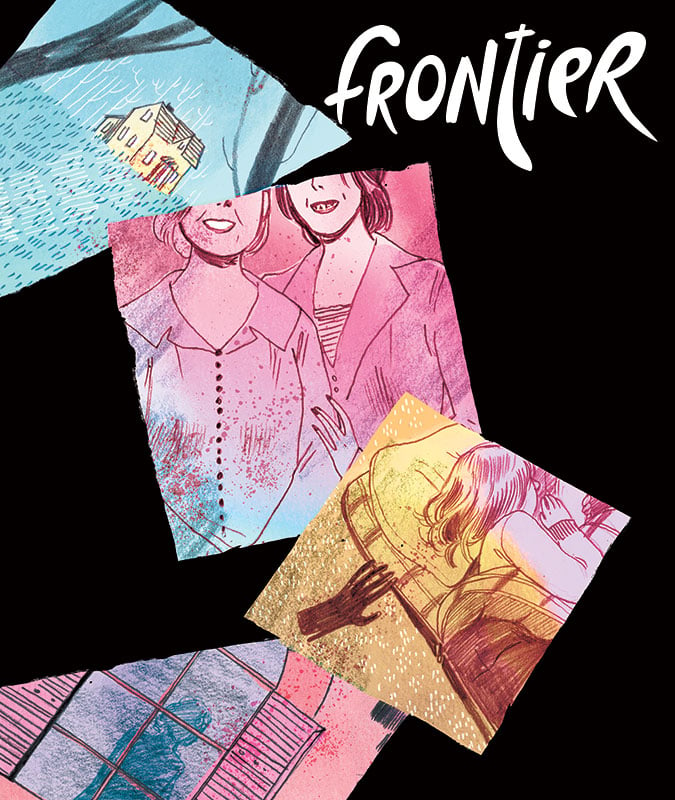 Sam Alden is one of the most interesting new voices in comics of recent memory, creating kinetic stories that often mix nostalgia and challenging topics with formal/visual experimentation. 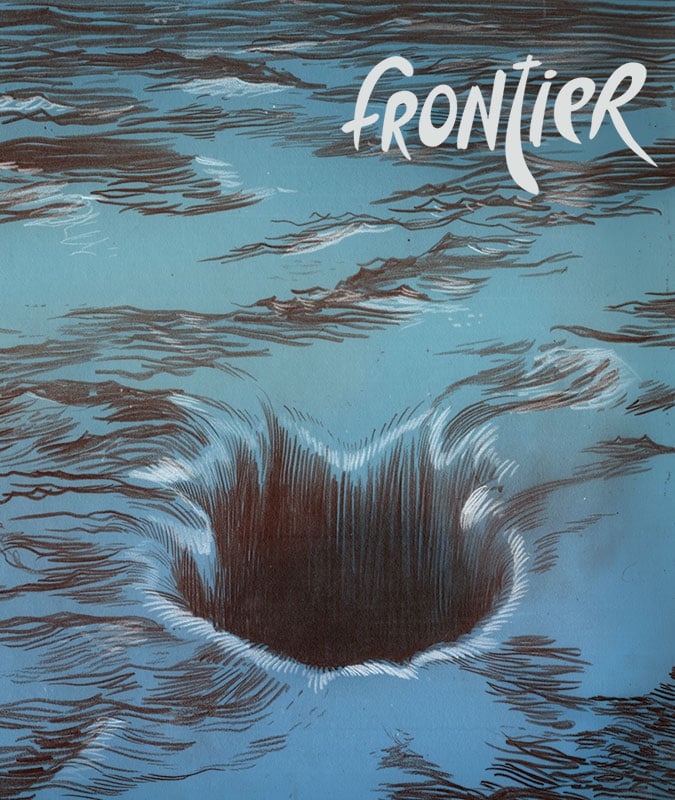 The fourth issue of our monograph anthology series features the unique and carefree work of illustrator Ping Zhu! Created specifically for Youth in Decline, Frontier #4: Ping Zhu includes 32 pages of color drawings, paintings, and doodles straight from the mind of Ping!

Ping Zhu is an LA-native and currently based in Brooklyn, NY. Ping's work has been featured in publications such as The New York Times, New Yorker, The Independent, Sunday Times, GOOD Magazine, Pushkin Press, Hèlium, and Nobrow Press. She is the author of the consistently hilarious Ugly Drawings Tumblr. 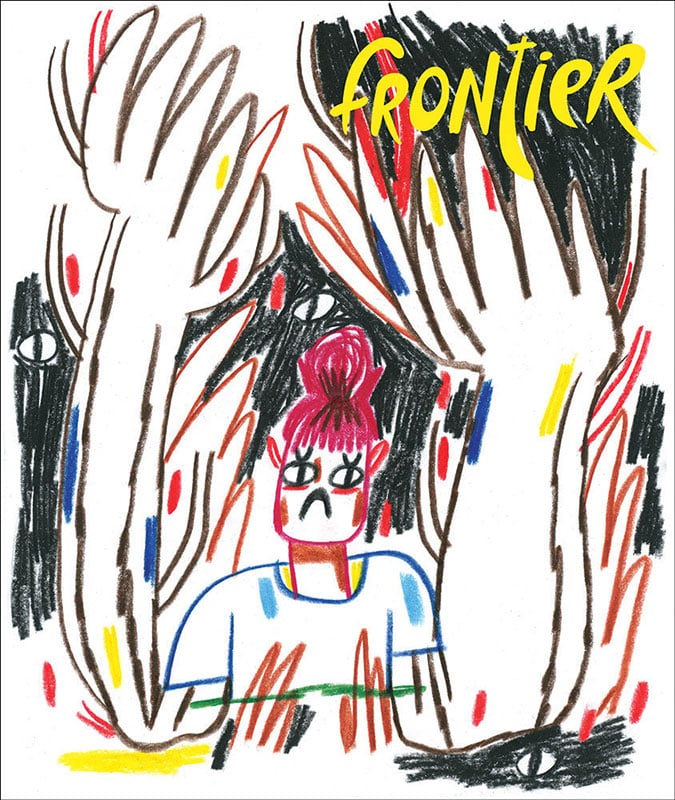 Our first issue of 2014 features the comics of talented German cartoonist Sascha Hommer. This will mark his first North American publication! Sascha Hommer is a talented and funny cartoonist, author of Insekt, Dri Chinisin, Vier Augen, and a number of short comics for publications such as ORANG, CityTales Blog, and Strapazin.

Frontier #3: Sascha Hommer features 3 short stories: "Drifter," "Transit," and "The Black Lord." These comics were adapted into English by frequent Drawn & Quarterly translator Helge Dascher, and lettered by Sascha himself! 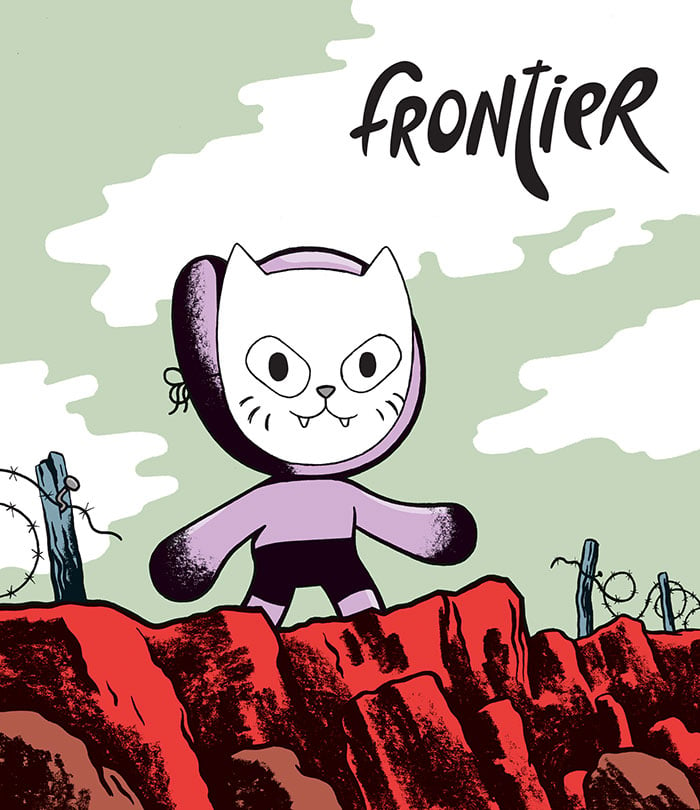 Who are these teenage girls that have taken over our streets, and what do they want?! Frontier #2: Hellen Jo features 32 full-color pages of paintings, pencils, and notebook scribbling by Hellen Jo. 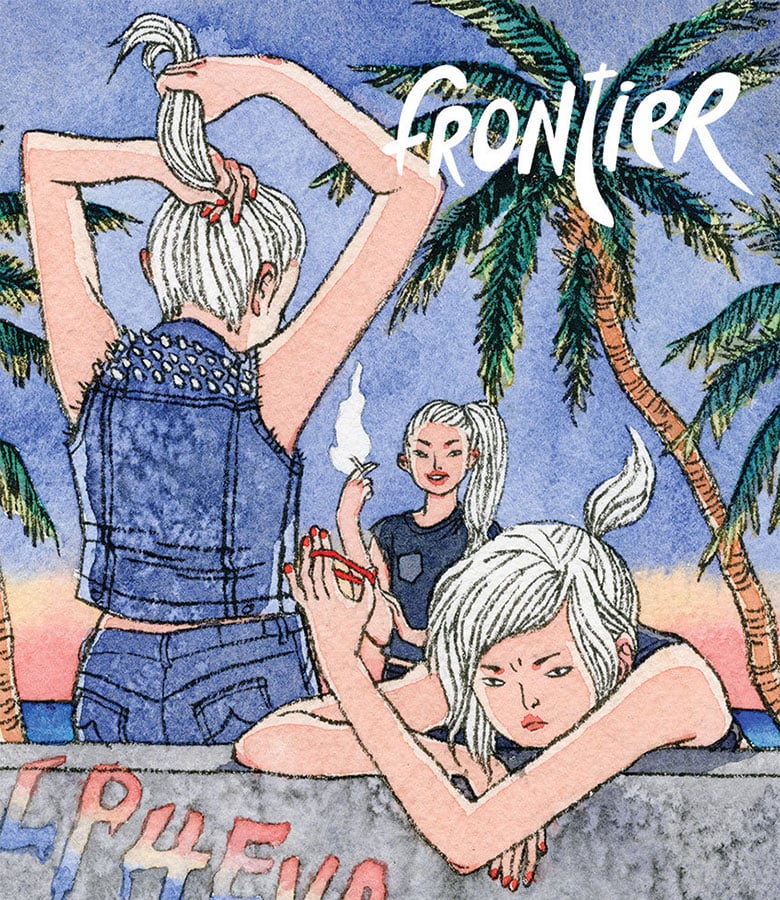 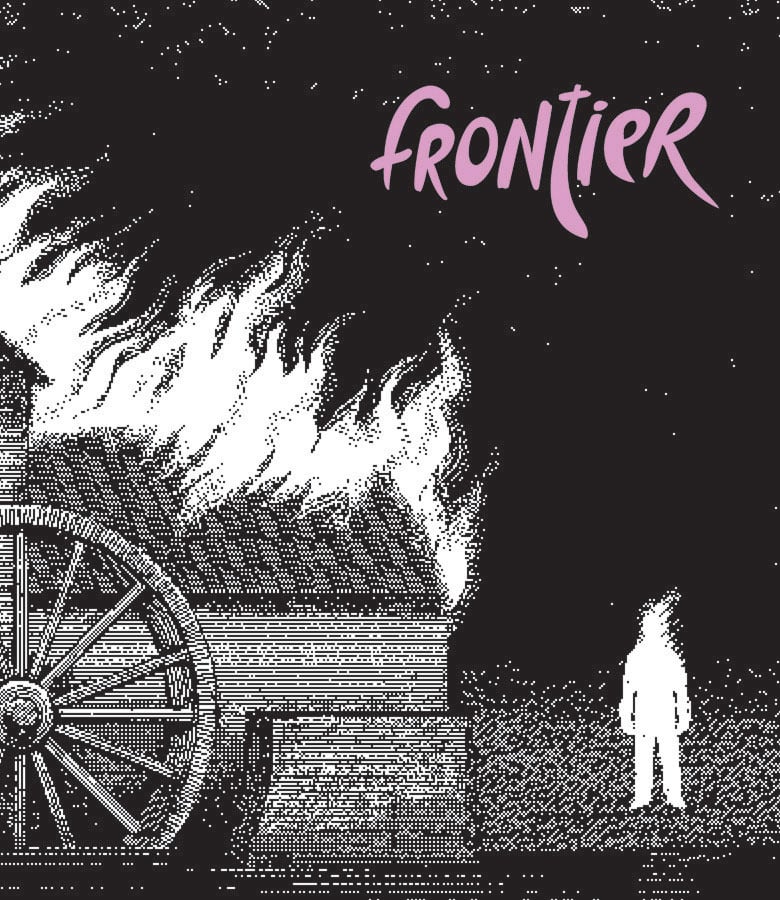